CEH scientists are among those presenting research updates to the European Geosciences Union General Assembly in Vienna this week (12-17 April 2015). The meeting at the Austria Center Vienna brings together scientists from all over the world to discuss aspects of Earth, planetary and space sciences.

Abstracts of oral and poster presentations led by CEH scientists and students can be found below:

Additionally, Dr Eiko Nemitz is a convenor of two sessions on Biosphere-atmosphere exchanges, while Bob Moore is convening a PICO session on hydrological forecasting.

On Thursday, Prof Christel Prudhomme is one of the panel of experts taking part in the Young Hydrologic Society's session on Meet the expert in hydrology - the mystery of evaporation.

Good luck to everyone taking part!

Not in Vienna? All great debates, union symposia, press conf., some medal lectures at #EGU15 are being streamed live! http://t.co/4ONMdfAvZ6 — EGU (@EuroGeosciences) April 13, 2015

Dr Paul Scholefield is one of the CEH scientists presenting at EGU2015 this week:

Below, a poster presentation by Dr Christine Braban and colleagues in the EGU15 Natural Hazards session on Atmosphere emissions from volcanoes and their dispersion: 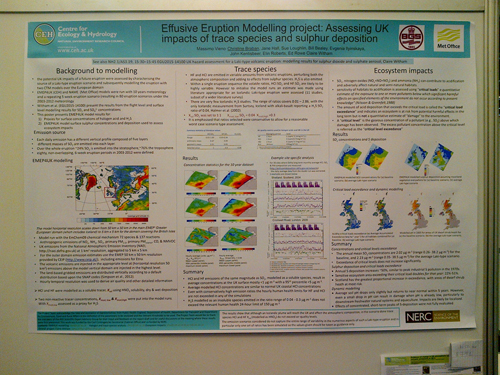