The purpose of this briefing note (also available as a PDF) is to collate some of the key points from the December 2015 Hydrological Summary, and to provide some additional context beyond the space and format constraints of the Summary. Neither the Hydrological Summary nor the briefing note provide a fully comprehensive review of the severity of the December 2015 floods. Both documents are based on currently available information and analysis conducted as part of routine reporting by the National Hydrological Monitoring Programme (NHMP). Selected additional datasets have been provided by the Environment Agency, Natural Resources Wales and the Scottish Environment Protection Agency. We wish to thank the Measuring Authorities for their support in providing information at short notice while responding to ongoing flooding. Fuller analysis of the meteorology, hydrology and impacts of the winter 2015/2016 flooding (including subsequent flooding in Scotland in January) will be conducted over the coming months by the NHMP and partner organisations. 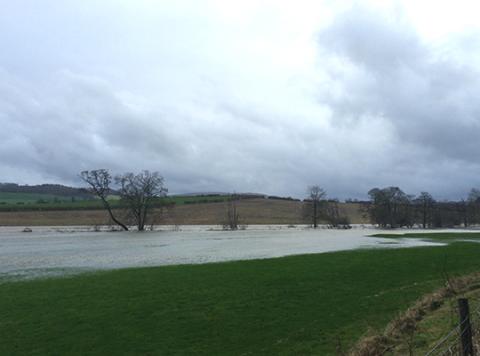 December was an extraordinary month in both meteorological and hydrological terms, with some of the most widespread and severe flooding witnessed in the UK. Slow-moving low pressure systems driven by a sustained moist south-westerly airflow brought prolonged heavy rainfall to northern and western areas with the persistent unsettled weather (including the named storms ‘Desmond’, ‘Eva’ and ‘Frank’) causing widespread and repeated flooding, bringing significant disruption to transport, utilities and agriculture and flooding over 16,000 homes in England alone. The prolonged and often intense rainfall across a large area of upland northern Britain contributed to unprecedented rainfall totals in many regions. Saturated soils resulting from substantial November rainfall exacerbated the fluvial flooding which followed in December.

The spatial scale of sustained very high flows was remarkable; many large catchments in northern Britain recorded their highest ever peak flows and/or monthly mean flows.

Based on data recently released by the Met Office, December 2015 was the wettest calendar month on record (in a series from 1910) with new 24-hour and 48-hour rainfall totals of 341.4mm (Honister Pass, Cumbria) and 405.0mm (Thirlmere, Cumbria), respectively, delivered by Storm ‘Desmond’. Provisional estimates using the FEH13 rainfall frequency model (Stewart et al 2013) suggest the 24h rainfall experienced at Honister Pass has a return period of around 1,300 years. Much of northern UK received double the average December rainfall with upland areas in the Lake District, north Pennines and the Cairngorms receiving three times the average monthly rainfall. Regions in northern England and most of Scotland registered their wettest month on record (in series since 1910). December followed a particularly wet November when much of northern England and southern Scotland received twice the average rainfall. The wet conditions in November meant that soils in many northern catchments were already saturated at the beginning of December, reducing their capacity to store rainfall, increasing runoff and exacerbating the fluvial flooding in December.

The record rainfall resulting from Storm ‘Desmond’ generated exceptional peak flows for many rivers draining upland areas of northern England and southern Scotland, while exceptional flows were also widespread during the Boxing Day flooding, with many major rivers draining the Pennines registering new maximum flows. See Table 1 for a list of selected new record peak flows established in December. Of particular interest are the three peak flows resulting from ‘Desmond’ at around 1,700 cumecs (the Eden, Tyne, and the Lune). Collectively, these are the highest three flows ever recorded (based on gauged records held on the UK National River Flow Archive (NRFA)) in England and Wales. The previous maximum flow for England and Wales was 1,516 cumecs, registered during the January 2005 floods on the Eden. To put these numbers in perspective, the mean flow for the Eden is 53 cumecs, the Tyne is 45 cumecs and the Lune is 36 cumecs.

It is very difficult to visualise quite what volumes of water these flood flows represent.  To use a very widely adopted comparator, an Olympic swimming pool is 2,500 cubic metres; the flood peak of 1,700 cumecs (cubic metres per second), is equivalent to more than 41 Olympic swimming pools every minute. This would fill the auditorium of the Royal Albert Hall in less than a minute.

The flood peak of 1,700 cumecs (cubic metres per second), is equivalent to more than 41 Olympic swimming pools every minute. This would fill the auditorium of the Royal Albert Hall in less than a minute.

It should be noted that while these are the three highest flows recorded outside Scotland, the highest flow on record for the UK is significantly higher; the Tay registered 2,268 cumecs in January 1993. However, 1,700 cumecs is more than double the maximum flow ever recorded on the Thames (800 cumecs in 1894) which has the longest gauged record on the NRFA and is the largest catchment in the UK. While the Lune catchment is only a tenth of the size of the Thames, it drains wetter upland areas in northern England and responds more quickly to rainfall.

It is standard practice to use recurrence intervals or return periods to index the severity of flood events. A full appraisal of return periods for the event will be undertaken later, but some early estimates have been prepared for some of the largest peak flows, in collaboration with the Flood Estimation Handbook (FEH) team at CEH. These have all been computed using the standard FEH enhanced single site method (Environment Agency, 2008). As shown in the Hydrological Summary these provisionally approximate to 1-in-300 years for the Eden, 1-in-150 years for the Lune and 1-in-100 years for the Tyne. 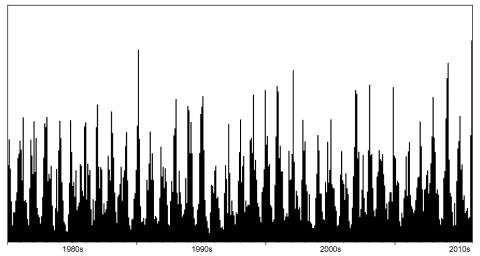 Figure 1: Mean monthly outflows for the UK since 1980.

There are a number of important considerations which must be borne in mind when assessing these peak flows. Firstly, the inherent difficulties of river flow measurement during flood conditions mean that much of the data used here are provisional and estimates may be revised by Measuring Authorities after quality control procedures have been completed. Secondly, the list is not exhaustive, and deliberately focuses on large rivers associated with flood impacts. It is likely that many other peak flow records were established in northern Britain, which will be examined in future, in more detailed studies. Thirdly, it should also be noted that past data are based on gauged records held on the NRFA, with the peak flow record lengths indicated in Table 1 below (please note that in some cases this may differ from the gauged daily flow record length given on the NRFA website). It is likely that higher flows will have occurred historically, pre-dating the gauged records held on the NRFA. For example, it has been suggested that the flood flow on the Tyne was the largest on the river since 1771 (Parkin, 2015).

In addition to peak flows, December was also exceptional in terms of the average flow for the month as a whole. Mean flows for December 2015 for rivers in northern England (eg the Eden, Tyne, Tees, Wharfe and Yorkshire Ouse) recorded three times their average flow for December. December mean flows for the Tweed in southern Scotland and Tyne in northern England were more than a third larger than any previous monthly mean flow on record (in records from 1962 and 1956, respectively). The three peaks in outflows from the UK resulting from ‘Desmond’, ‘Frank’ and the Boxing Day storm all ranked in the top five largest daily outflows on record (in a series from 1980). The UK daily outflows are a monthly sum of flows in major/representative UK rivers (Marsh et al 2015). This resulted in a December mean outflow from the UK that was the largest on record for any month (Figure 1 above). Mean flows for calendar year 2015 were the largest on record for the Nith, Tweed, Clyde, Forth and Tay in Scotland, the Eden in England, and the Mourne in Northern Ireland.

Whilst not comprehensive, the following gives an overview of the wide range of flooding impacts across northern Britain in December, based on early assessments; fuller analyses of flood impacts will no doubt be produced in the coming months.

Impacts of the multiple flood events caused physical damage on, and a large economic cost for, northern communities. Initial estimates indicate that 16,000 homes flooded in England with many more flooded in Scotland, Wales and Northern Ireland. With widespread damage to businesses, shops, community buildings and medical centres, as well as homes (which in Corbridge resulted in a shortage of rented accommodation), the Armed Forces were deployed to aid the emergency services and clear-up operations in numerous locations across Cumbria, Lancashire and North and West Yorkshire.

Travel by both road and rail was disrupted, dividing and isolating communities. A sink hole opened up on the M62 in Greater Manchester on the 26th; many roads and bridges were closed across Northern Ireland and northern Britain (North Yorkshire Police ran out of ‘Road Closed’ signs); numerous road bridges were destroyed or severely damaged (eg Pooley Bridge on the 5th, Tadcaster on the 29th, Elland on the 29th) and rail services were unable to run due to flooding and infrastructure damage (eg Metro services between Jarrow and South Shields on the 5th; West Coast mainline north of Carlisle on the 6th December; TransPennine Express services between Manchester and Hebden Bridge on the 26th).

With many rural areas affected, agricultural impacts were widespread, ‘Desmond’ resulted in the loss of 1,000 sheep in Cumbria and cattle were washed downstream. Other livestock losses and field inundation across Scotland and northern England will have undoubtedly had a significant impact on farming communities. 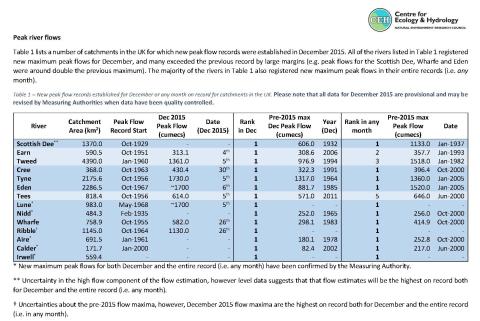 Table 1: New peak flow records established for December or any month on record for catchments in the UK. See a PDF version of this table.

Several other briefing notes have been prepared by CEH scientists, discussing the potential role of climate change and upland land management in these and other UK flood events.