The World Health Organization is holding World Antibiotics Awareness Week this week (14-20 November 2016) to increase awareness of global antibiotic resistance and to encourage best practice among a number of sectors. Dr Andrew Singer of the Centre for Ecology & Hydrology has written the following blog post explaining some of the issues and current focuses of research:

This blog post summarises the scope of a new publication in Frontiers in Microbiology, which can be found here. A Policy Briefing can be read here (PDF). 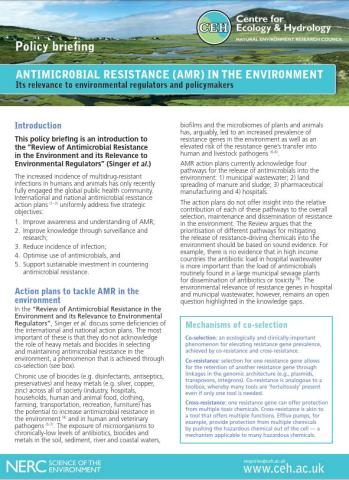 The problem with antimicrobial resistance (AMR), globally, is the combination of: 1) increased prevalence of antibiotic resistance; 2) rapid spread of AMR due to global travel; 3) antibiotic misuse; and 4) too few new antimicrobials in development. National, regional and global AMR Action Plans have been drafted to tackle many of these problems. Thorough reviews, such as the O’Neill AMR Reviews, provide a useful overview of these challenges and some mitigation measures. However, symptomatic of the O’Neill Reviews and AMR Action Plans is their under appreciation of the role that the environment plays in the selection, spread and transmission of AMR. Discussions of the environment are typically limited to the pharmaceutical manufacturing plants as a source of antibiotics and the role that sewage and farm run-off can play in dissemination of antibiotics. The discussions on these issues are superficial and narrow in scope.

Current AMR Action Plans and the O’Neill Reviews see antibiotics as the primary driver of AMR; hence, all mitigating measures are focused solely on reducing their use and release into the environment. This vision of the challenge of AMR is not helpful as it omits other AMR drivers that could be, on their own, more important than antibiotics for selecting, maintaining and spreading AMR in the environment, let alone as a collective group of AMR drivers.

"...symptomatic of the O’Neill Reviews and AMR Action Plans is their under appreciation of the role that the environment plays in the selection, spread and transmission of AMR."

"This is a very important outcome as it means AMR Action Plans might fail to achieve their goal without a more holistic plan to address all the AMR driving chemicals."

There is a need to focus on all of these AMR driving chemicals when constructing an AMR Action Plan. In the short term it might be prudent to focus on reducing the use of these chemicals and recycling where possible. However, it is possible that these reductions will not be enough to reduce the prevalence of AMR in the environment below critical thresholds. As a result, we need to determine which of these chemical classes are most important for selecting and maintaining AMR in the environment and focus our efforts on reducing their use and emissions. It is also crucial to know what the critical thresholds are for selection in the environment. These are probably our biggest unknowns at the moment.