Analysing the state of the UK’s nature

by Dr Nick Isaac and Charlie Outhwaite, co-authors of State of Nature 2016

The first State of Nature report published in 2013 was influential for shaping the debate about wildlife conservation in the UK. Tomorrow (14 September 2016) sees the publication of the follow-up State of Nature 2016, with updated analysis and reporting. Some of you may have seen a preview of the 2016 report on BBC TV's Countryfile programme this weekend.

The State of Nature Partnership is led by RSPB and is now made up of 53 organisations, comprising conservation charities, biological recording schemes and societies, and a small number of research organisations including the Centre for Ecology & Hydrology (CEH).

CEH has contributed two large datasets to the 2016 report: long-term trends for 1,300 plants from the Countryside Survey, which we’ve run since 1978, and annual indices of status for 1,600 species from the Biological Records Centre (BRC). CEH also contributed long-term population trends in 60 butterfly species from the UK Butterfly Monitoring Scheme, which is run as a partnership with Butterfly Conservation. Together, these datasets make up around 75% of the 3,816 species on which the State of Nature 2016 analysis are based.

In this post, we describe in more detail where the BRC trends come from. In a later post, we’ll explore the main messages from the report, and how they should be interpreted.

The biological records data we analysed were collected by volunteer-run schemes and societies and covered 20 taxonomic groups. The dataset includes familiar insect groups such as dragonflies, bees and grasshoppers, as well as less well-known groups like caddisflies, spiders and bryophytes. 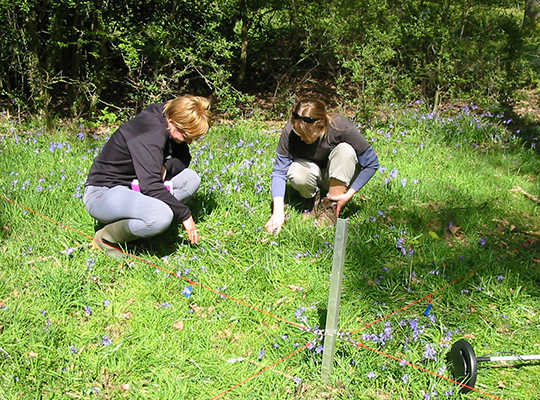 Recording vegetation during the most recent Countryside Survey

None of these organisms is covered by a systematic monitoring scheme (which only exist for a small number of groups such as birds and butterflies), so opportunistic biological records are really the only way to form a picture of their status and trends. However, the fact that recording is not systematic leads to a range of biases in the data: for example, most recorders collect data from near where they live. A deeper problem is that records contain no information about how the data were collected, about which organisms the recorder was looking for, and how hard they looked. The records tell us only which species were recorded, so absences don’t necessarily mean that the species was absent from the site; it could mean that species was present but undetected, or alternatively that it was detected but not reported (e.g. “boring” common species may be systematically under-reported).

At the Biological Records Centre based within the Centre for Ecology & Hydrology, we’ve invested substantial effort, in partnership with JNCC and recording schemes, to understand those biases and develop analytical tools for biological records. We’ve come a long way since the 2013 State of Nature report, and now favour a tool known as Bayesian Occupancy-Detection (BOD) modelling1. BOD models explicitly describe the detection process and are flexible enough to accommodate multiple forms of biased data collection. By using BOD models, the information we contributed to the 2016 State of Nature report is far more reliable than was used in 2013.

Our work for State of Nature is part of a larger body of research using biological records, all underpinned by BOD models. Each year we produce two biodiversity indicators for the UK government: one of priority species and one for pollinating insects. Increasingly, we’re combining these models with data layers on specific drivers of change, as in our recent paper quantifying the impact of neonicotinoid pesticides on wild bees.

We are also working with recording schemes to improve the quantity and scope of new observations, principally through development of systems (such as iRecord and associated mobile apps) for capturing and reviewing biological records. 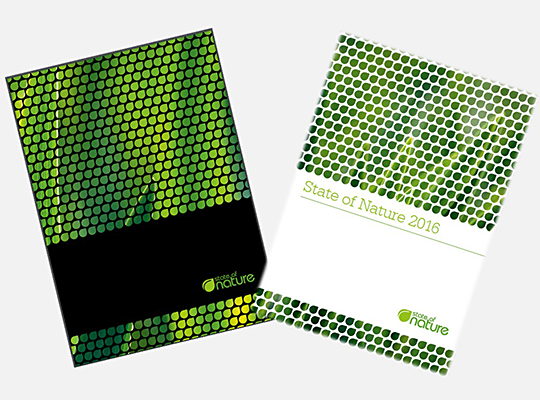 The 1,600 species we contributed to the 2016 State of Nature report via the BRC is twice as many as we produced for the 2013 report. However, it’s only a small fraction of the more than 7,000 species for which we ran models. Unfortunately, the vast majority of species did not meet our stringent criteria for inclusion: for the remainder there was insufficient data for our models to be useful or reliable. We’re working now to make BOD models more suitable for rare species and under-recorded taxonomic groups, so that the next State of Nature report, hopefully out in 2019, will cover the status of a much broader set of species and is increasingly representative of UK biodiversity.

Dr Nick Isaac is a macroecologist who uses statistics to study how biodiversity is distributed in space, how it is changing over time, and how we measure it.

Charlie Outhwaite is a PhD student at the Centre for Ecology & Hydrology, University College London and RSPB.