Invasive non-native species (INNS, sometimes known as invasive alien species) are organisms introduced by human beings into areas outside their native range, where they then threaten biodiversity, ecosystems, human health or the way people live.

INNS are one of the top five threats to biodiversity worldwide. They are economically damaging, costing the UK and the EU an estimated £1.7bn and €12bn per annum respectively. The effects are felt across many sectors from farming, aquaculture and horticulture to transport and construction, as well as recreation and human health.

UKCEH collaborative studies have shown that introductions of non-native species (NNS) are increasing at unprecedented rates across the world, with no sign of slowing down.

UKCEH has led research initiatives over 15 years across the UK, the EU and globally, focusing on developing information systems, horizon scanning, surveillance and risk assessment. Where INNS will pose a threat to biodiversity and ecosystems in a region, prompt action is vital. The horizon scanning approach developed by UKCEH, working with experts, can predict where there is potential for harmful INNS to arrive and become established within the next ten years and can then prioritise action.

The online GB Non-native Species Information Portal and alert system provide detailed information on over 300 NNS for Defra, the UK devolved governments and UK Overseas Territories, with additional information on more than 2000 non-native species. By improving the recording and flow of NNS distribution data in Britain we provide a central repository of useful information accessible to all stakeholders.

Recent developments using citizen science coupled with emerging technologies have rapidly improved the quality, quantity and rate of flow of NNS data. UKCEH has led advances in technology in online recording through the iRecord website and smartphone app and species-specific apps, such as Asian Hornet Watch, making it quick and easy for volunteers to report sightings of INNS.

Since its launch in 2017, the Asian hornet app has been installed on around 11,000 devices and more than 12,000 records of suspected sightings have been submitted. However, there have only been a few confirmed sightings of the Asian hornet each year in Great Britain, with most records being of European hornets.

The online reporting alert system has enabled surveillance and in some cases a rapid response from the UK Government to sightings of priority species such as the killer shrimp, Asian hornet, quagga mussel and two-leaf watermilfoil, all identified as high priority INNS through UKCEH-led horizon scanning.

In 2016, the first record was received of an Asian hornet in Great Britain, and the GB-NNSIP alert system provided spatial information to the National Bee Unit and Defra to underpin its eradication. More recently UKCEH has been predicting the spread of the Asian hornet in the absence of control measures. These innovative modelling approaches have demonstrated the value of rapid response in preventing economic and environmental impact.

UKCEH datasets underpinned the UK Biodiversity Indicator B6, ‘Pressure from invasive species’ and influenced two indicators for the UK Government’s 25-Year Environment Plan (2018). These indicators will be used over the next 25 years to monitor whether the number and impacts of INNS are decreasing.

UKCEH has helped to protect UK Overseas Territories from INNS and given scientific advice to the House of Commons’ Environmental Audit Committee inquiry on INNS, the United States Government’s National Invasive Species Council and the South African Centre of Excellence for Invasion Biology.

Professor Helen Roy of UKCEH was one of three scientists selected from around the world to lead the new Intergovernmental Science-Policy Platform on Biodiversity and Ecosystem Services (IPBES) thematic assessment of invasive alien species and their control, which will influence the post-2020 framework for biodiversity to be adopted at the UN Biodiversity Conference of the Convention on Biological Diversity.

“The new list of invasive species at risk of entering BIOT, and suggestions on how to prevent or react to their arrival, will help the BIOT Administration protect the Territory’s unique environment and incredible biodiversity.”
Deputy Administrator, British Indian Ocean Territory (BIOT)

“From the initiation of APHA’s response to Asian hornet, we quickly realised that call handling and triaging of information from the public was vital. Having a mechanism in place through Defra’s Non-Native Species Secretariat with UKCEH proved to be the perfect solution. This allowed our National Bee Unit technical staff and inspectors to concentrate their skills to deliver our on-the-ground response … Working with UKCEH proved to be a great partnership generating many synergies.”
Head of Plant & Bee Health, Animal and Plant Health Agency, Defra 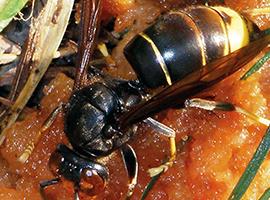