The UK government is committed to reaching net zero carbon emissions by 2050. In contributing to this goal, the Offshore Wind Sector Deal has set a target of 30GW generation capacity from offshore wind farms (OWFs) by 2030. This is equivalent to a third of UK electricity demand being provided by this technology.

However, the development of OWFs may have impacts on the behaviour, habitat and abundance of seabirds. So in order to ensure that birds and OWFs can co-exist in harmony, OWF developers need to be sure that their installations will neither affect individual birds negatively nor cause a population decline.

Since 1973, UKCEH has been monitoring seabirds on the Isle of May off the east coast of Scotland. Jointly funded by UKCEH and the Joint Nature Conservation Council (JNCC), this is the most comprehensive study of the population of seabirds in the UK. The long duration of the data collected provides a baseline to help understand the effects of climate change and offshore wind farm (OWF) developments.

The OWF industry needs to quantify the effects of its operations on seabirds. UKCEH has designed and delivered an approach that, through GPS tracking, allows scientists to evaluate the consequences of OWF developments for seabird populations in protected areas. Our scientists can track individual birds to assess impacts on their survival and breeding, as well as assessing impacts at population level.

UKCEH has undertaken Integrated Population Modelling, an approach that forecasts seabird populations under different future OWF scenarios while properly accounting for uncertainty. This is used by regulators to assist in decision-making for permissions.

Developers of offshore wind farms have to demonstrate clearly whether their installations have a negative impact on individual birds, and whether they cause population declines. UKCEH has worked with government and the wind energy sector to test these questions robustly for the first time. Using carefully designed experiments and models, we have substantially improved the evidence base and reduced the uncertainty in assessing and regulating offshore wind developments. Particularly:

The use of GPS devices on seabirds to test the overlap between planned OWF footprints and individual seabird breeding is now the standard approach. It is an integral part of the Ornithological Monitoring Strategies of the energy companies EDF and SSE that have been agreed with regulators (2018–2020).

The population tool developed by UKCEH has replaced the previous method of quantifying the data. This has allowed different OFW designs to be tested while minimising disruption to the seabirds.

Using these tools, the regulator has an overarching framework for assessing the population-level impacts of OWFs and can assess more easily how the potential impacts of an offshore development compares to previous applications. The improved biological understanding and lower uncertainty will help regulators to make the most robust decisions and will reduce the risk to an OWF developer of their application being refused.

To meet the Climate Change Bill targets across the UK for net zero carbon emissions by 2045, a major expansion of the offshore wind sector is planned. UKCEH’s work will ensure that these OWFs are built and will help to achieve the targets with minimum effect on the seabird population.

“One of the biggest challenges to the development of sustainable wind power in offshore regions is the potential impact this could have on seabirds. Research done by UKCEH, which integrates this improving knowledge base in to impact models, could make the difference between authorities granting an operating licence or this being refused.”
Defra’s Chief Scientific Adviser (2012-19)

“UKCEH are tracking seabirds to understand if the presence of the new wind farm has an effect on this behaviour. This type of research is essential for EDF Renewables as a responsible developer, so we can understand the impacts of our projects and if found to occur, to mitigate these impacts. Outputs of the UKCEH work will feed into future development decisions, such as the allocation of new offshore wind farm sites. Ultimately the work will help the UK to work towards meeting its climate change ambitions whilst minimising impacts on the natural environment.”
Project Director, EDF Renewables 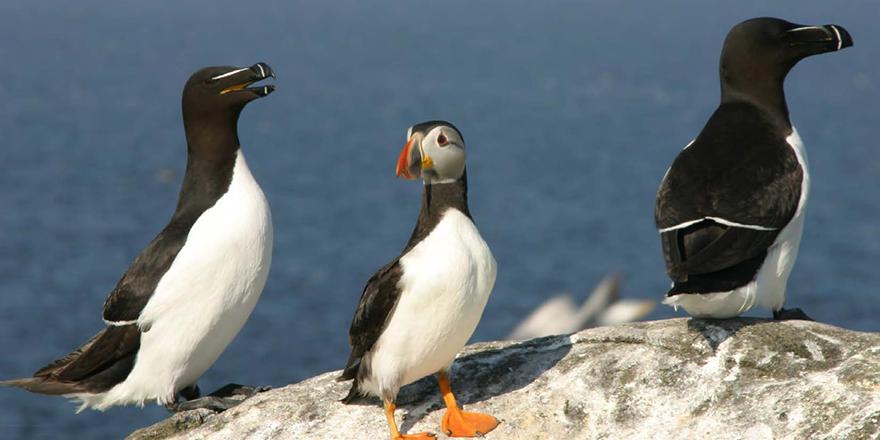 Seabirds on the Isle of May