Reactive nitrogen is produced in various forms: from combustion engine exhausts, as animal and plant waste and particularly as synthetic nitrogen fertilisers.

About 80% of the nitrogen compounds produced by human activities, worth about US$200 billion, are lost to the environment each year. This lost nitrogen damages the environment: it degrades our soils, pollutes the air and triggers the spread of ‘dead zones’ in waterways, as well as making a large contribution to climate change – nitrous oxide constitutes eight per cent of greenhouse gas emissions, with a warming potential 300 times that of carbon dioxide.

So we need an international framework for scientific support on global nitrogen policy, which can work with the United Nations towards the sustainable development goals (SDGs) to save US$100 billion annually and achieve multiple environmental benefits.

The nitrogen research at UKCEH is underpinned by world-leading measurement and modelling of the nitrogen cycle, quantifying how nitrogen compounds move between air, land and water. This is crucial to understanding the effects of nitrogen pollution on air quality, climate warming, algal blooms and biodiversity loss.

UKCEH research has pioneered international recognition that all these issues are linked. Our scientists initiated, led and delivered the European Nitrogen Assessment, the first comprehensive continental analysis of nitrogen benefits, threats and policy opportunities.

Based on these successes, UNEP invited UKCEH to develop a global process of science support on nitrogen policies, the International Nitrogen Management System (INMS). With 80 partners globally, INMS is providing evidence on flows, impacts and solutions, including leadership of the first International Nitrogen Assessment.

UKCEH research has provided significant evidence to the UNECE Convention on Long Range Transboundary Air Pollution, informing the revised National Emissions Ceiling Directive that commits the UK to nitrogen oxides levels 73 per cent below 2005 levels by 2030. In 2018, using the UKCEH-led UNECE Ammonia Framework Code as its basis, Defra issued a UK National Ammonia Code and launched a £3 million scheme to support farmers in achieving reductions. A 16 per cent reduction across the UK will mean savings to UK farmers of £130 million per annum by 2030.

The UN Environment Programme (UNEP) recognised nitrogen as ‘an emerging issue of environmental concern’ in its 2018-19 Frontiers report under UKCEH leadership. Through INMS, UKCEH brought together UNEP, SACEP and the eight governments of South Asia to draft the ‘Resolution on Sustainable Nitrogen Management’ adopted by 173 nations at the Fourth UN Environment Assembly in 2019. The approach draws on UKCEH research, emphasising the need for action across the nitrogen cycle, with UKCEH and UNEP now co-developing the ‘Interconvention Nitrogen Co-ordination Mechanism’ (INCOM).

UKCEH enabled UNEP to establish the ‘UN Global Campaign on Sustainable Nitrogen Management’, launched in Colombo in 2019 with a theme of ‘Nitrogen for Life’. The ‘Colombo Declaration’ endorsed the ‘UN Roadmap for Sustainable Nitrogen Management, 2020-2022’: both documents were prepared under UKCEH’s leadership. Most importantly the Colombo Declaration agreed the ambition to ‘halve nitrogen waste’ from all sources by 2030, offering the potential to save US$100 billion per annum globally, with multiple benefits for health, ecosystems and livelihoods.

“Under the SANH [GCRF South Asia Nitrogen Hub], SACEP has been able to get connected to tackle the problem of nitrogen pollution through a framework policy that is based on scientific research and findings. The UNEA-4 Resolution on Sustainable Nitrogen Management is a unique example. The SANH gives multiple benefits and will help SACEP members to implement multiple SDGs.”
Director General, South Asian Cooperative Environment Programme (SACEP)

“The whole campaign is informed by science. You have managed to mobilise through your networks not only the scientific data but the scientists as a network to support the Global launch … I did not foresee this happening so very, very fast … happening eight months after the resolution is not common … I’ve been impressed by the mobilisation of the scientific community that [UKCEH] have led. So I really want to appreciate your leadership.”
Director Deputy Executive Director of UN Environment 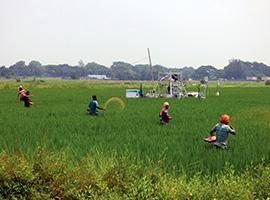